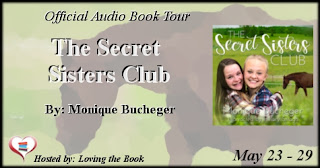 This week I'm privileged to share with you the NEW cover for Secret Sisters Club, by Monique Buchager and my review of the book. My review was created years ago when I first read the book, however, I have updated to reflect the audiobook version which I was honored to get a sneak peek at before it's release. Don't forget to scroll down to the bottom to be entered into the GIVEAWAY.

My Review: The Secret Sisters Club is a fantastic cross between The Parent Trap and An American Girl. It’s a feel-good book that will stand the test of time just like The Little House series. What I liked most about this book was how down to earth the story is. There aren’t any dragons, or unicorns, but Monique Buchager doesn’t need those to bring magic to the page. Ginnie West is a larger than life character with realistic emotions that come across in every chapter. The audiobook narrator, Hillary Straga, brings another layer of magic to the book. Her voice is perfect for telling this story of a young girl and her quest to not only connect her family to a new one, but reconnect it to the past. 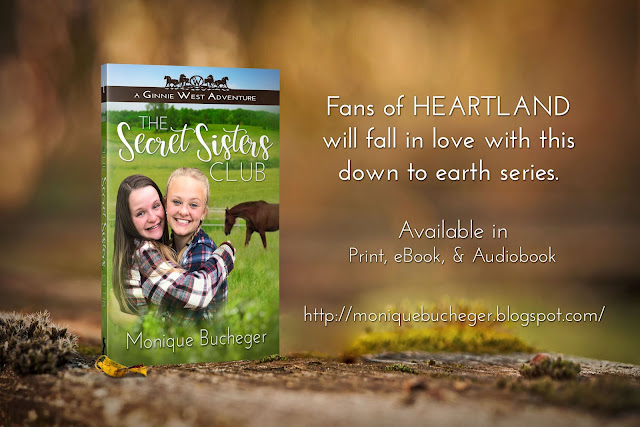 3) The blonde girl on the cover (Gracie--who is modeling for Ginnie) lives in the real West Farmhouse.

4) The brunette girl on the cover (Jessie--who is modeling for Tillie)--is Gracie's cousin in real life.

6) Queenie West's (Ginnie's mom) personality is based on Gracie and Jessie's grandmother. Gracie looks very much like her--just as Ginnie looks like her mom.

7) I spent a lot of time at the "real Wests" farm--as a teenager--babysitting the kids that lived there--especially Gracie and Jessie's dads--and their aunt.

8) Gracie and Jessie's cousins grew up on a different farm I mention in the books: Chandler's Crossing--Toran and Ginnie's friend, Austin's home. :)

9) Gracie and Jessie's grandpa and grandma were my 4H leaders as well as my friends.

10) I raised a lamb named Appomattox (because I was fascinated with the Civil War)  on the real West farm and showed it at fair as a teen.

Snippets
Snippet # 1)
Heart thumping, Ginnie jerked Calliope to the right.
Traxx and Tillie broke left.
The car zoomed between them.
Brakes squealed. A horn blared. Tillie shrieked.
A second car, this one burgundy, followed the first car, blocking the rest of the lane and Ginnie’s exit.
Without prompting, Calliope gathered herself and launched into the air, seeming to grow invisible wings. Ginnie was electrified. She loved the sensation of floating and the thrill of power that came when riding a jumping horse. Adrenaline fizzed through her like diet soda and Mentos as she and her horse sailed over the hood of the burgundy car.

Snippet # 2)
This is a scene between Tillie and her mom--that tells what Tillie REALLY wants:
Matilda Grace, I know you don’t like people to fuss over you, but it’s your birthday. I want to celebrate you with your friends.”
Tillie groaned. “Mom, I don’t want a big party. Just take Ginnie and me shopping. Please? That’s good enough.”
She shook her head. “What twelve year-old doesn’t want a real party?”
The kind of twelve-year-old who likes being invisible so people don’t ask you questions you don’t want to answer. Tillie smiled. “Mom, it’s my birthday. I like being with the Four Musketeers. I think that would be fun.”
I want you to marry Ginnie’s dad–that’s what I really wish for my birthday, Ginnie and I have talked about being sisters a million times. That’s what I want … to be sisters, only for real.