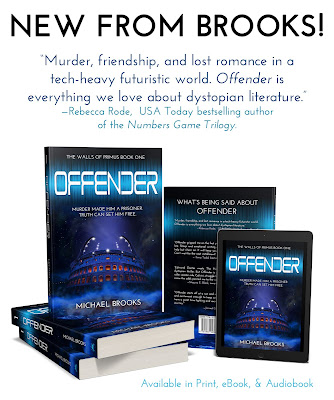 Hey everyone! I've got some eciting news. Some of you might have already heard that I have a new book coming out. This one is a little more grown up from my other books, so I'm publishing it under the name Michael Brooks instead of Mikey. It's a YA dystopian that can be described as The Gladiator meets The Shawshank Redemption. The release date is June 4th for the paperback, hardback, and eBook; the audiobook is in production right now and will come out this summer (narrated by the talented actor, Charles Hubbell). I'm so excited for you guys to read it! It's my best book so far!


But you don't have to take my word for it. Here's what some others are saying about the book:

“Offender gripped me on the first page and didn’t let go until the last line. Sharp and emotional writing combined with a hero you can’t help but cheer on. It will keep you turning pages with anticipation. Can’t wait for the next installment!”
— Ilima Todd, bestselling author of the Remake series.

“Edmond Dantes meets The Hunger Games in this incredible dystopian thriller. But Offender is so much more than a screaming roller coaster ride. Calvin’s struggle to stay true to his values and overcome the odds pierced me to the very core! I’m still reeling!”
—Shauna E. Black, award-winning author of Rebel Bound.

“Offender starts off at a run and never lets up. Full of action, heart, and excitement enough to keep any reader up late, you're going to have a great time fighting and racing along with Calvin on his heroic journey.”
—Jarred Garrett, author of the BEAT Series. 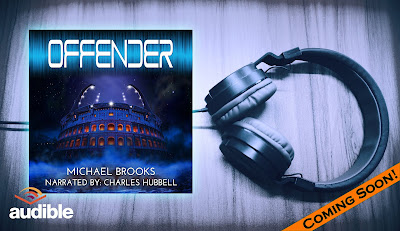 In a distant future, all criminals of violent crimes are sentenced to life in the Arena where they must battle against both man and beast in a fight to the death.

When sixteen-year-old Calvin Sawyer is wrongly convicted of his father’s murder, his charmed life as the son of a senator is changed forever. He’s stripped of his rights, his humanity, even his name. Now as the property of the Arena, offender CS4521 must learn to fight in the colosseum. It’s kill or be killed.
Posted by Mikey Brooks at 4:54 AM